Senseless: The War on Birth Control

The Population Institute today released “Senseless: The War on Birth Control.” The report offers an eye-opening look at how birth control opponents at the federal and state levels are mobilizing in an effort to restrict access to family planning services and information.

The Trump Administration and its allies in Congress have failed, thus far, to “repeal and replace” the Affordable Care Act, which substantially expanded insurance coverage of contraceptive services. But birth control opponents are attacking on multiple fronts. Numerous policies and programs, including Title X, are at risk of elimination. Created in 1969 with broad bipartisan support, Title X is a federal program that supports family planning clinics serving low-income communities in the U.S. Birth control opponents are even seeking to eliminate evidence-based sexuality education programs in our schools and replace them with failed “abstinence-only” programs. The Trump Administration is also seeking to defund U.S. support for family planning services in developing nations.

Robert Walker, president of the Population Institute, said, “Birth control opponents will stop at nothing in their bid to restrict access to contraceptives services and information. They are making regulatory changes, amending laws, cutting funding, changing longstanding policies, and filing legal challenges. It is a breathtaking assault on reproductive health and rights at home and abroad, and it is not going to end anytime soon.”

In addition to detailing the numerous attacks on birth control funding and policies, the report looks at the shifting—and senseless—rationales being offered up by birth control opponents. Walker said, “The arguments that are being made by birth control opponents lack any rational basis. If women are deprived of access to contraception, the results are predictable. There will be more unwanted pregnancies, more abortions, more maternal deaths, and increased government outlays. Opposition to birth control, measured by any desirable outcome, is just plain senseless.” 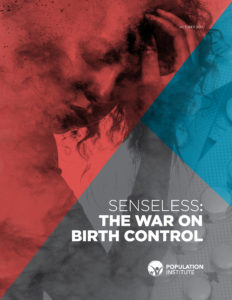